Meet Arizona’s Most Popular Athletes of 2022

2022 is nearly over, and for sportsbooks in Arizona it’s been one hell of a season, with the likes of the Phoenix Suns finishing the 2021-22 season with an impressive 64-18 record before losing in the Western Conference Finals.

However, it’s also been a strong year for individual performances, with many Arizona-born stars across each major league making a name for themselves. So, we wanted to compare the popularity of each to reveal the most popular athletes from the Grand Canyon State.

By collecting online and social media performance data for each NFL, NBA, NHL, and MLB star (who was actively playing at some point during 2022), we’re able to reveal the most hyped players from Arizona over the last 12 months.

To do this, we created an index that considered five key factors, with individual weightings adding up to 100.

These were: average monthly Google searches, Wikipedia page views, social media growth, social media mentions and the percentage of online comments deemed positive. All of which were recorded over the last 12 months.

So, read on to find out who the top players are, and the why some are only on the way up.

Remember to also stay close to this site for the best Arizona sportsbook promos. 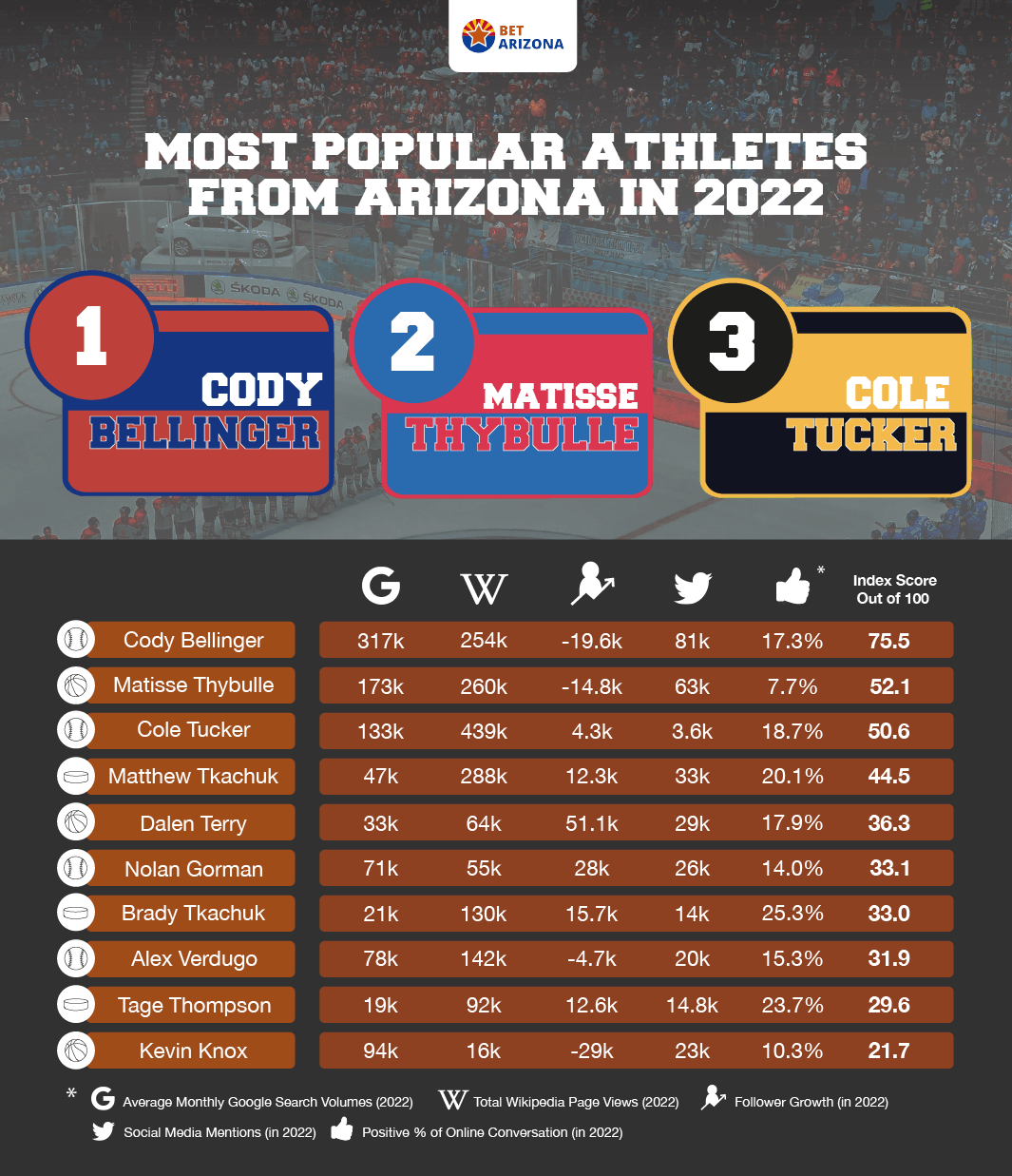 Scottsdale-born Bellinger collected the NL Rookie of the Year Award in 2017, then captured the NL MVP two years later after cranking out 47 home runs. But even as his play fell off in recent seasons (he just inked a one-year deal with the Cubs), Bellinger still possessed the highest index score of all Arizona-born athletes on our ranking table (75.5).

Bellinger had a whopping number of people searching for him on Google each month (317,00) and a startling 254,000 total Wikipedia views, with the only person beating this figure being Matisse Thybulle, in second place on the leaderboard.

The former Boys in Blue star’s social media mentions were sky-high this year (81,000), which was well above any other athlete in the top 10, let alone the top 5.

With as many as 17.3% of positive conversations being had online, it seems this star is still making waves, despite his departure and declining play this year.

Or maybe people were simply more interested in him than ever, wanting to find out which team he’d be joining next after his time with Dodgers was coming to a close.

While Dodgers fans will likely miss the slugger who came up in their farm system, Bellinger's departure hasn't had much effect on the Dodgers' World Series future odds. Over at BetMGM Sportsbook Arizona, they have the third best odds to capture the Fall Classic at +800.

Scottsdale-born Matisse Thybulle is another major athlete winning peoples’ attention this year, with an index score of 52.1 and ranking second among Arizona’s most popular 2022 athletes.

The Philadelphia 76ers guard received a whopping 173,000 monthly Google searches on average in 2022, and an impressive 260,000 Wikipedia page views; proving that fans and beyond have taken a real shine to the NBA defensive specialist this year.

Thybulle's lack of offensive juice (he's never averaged more than 5.7 points a game) likely contributed to just 7.7% of positive online conversations recorded this year, the lowest of the top five contenders for most popular Arizona athletes.

But Thybulle did still gain a startling 63,000 social media mentions, which could be thanks to the 76ers extending his contract through to the 2023 season, as well as his YouTube vlog-inspired videos about life in the NBA.

He may have just signed a minor league deal with the Colorado Rockies, but former Pirates shortstop/outfielder Cole Tucker still won plenty of attention this year, making him the third most popular Arizona sportsman on our list.

Tucker might have come in third place on our list, but surprisingly he has just 3,600 social media mentions for the year, which was the lowest amount across all contenders. Perhaps because he only appeared in 18 games for the Pirates after struggling at the plate.

At least it looks as if Arizona residents will be closely following his career rehabilitation with the Rockies organization.

Claiming the highest Wikipedia page views for the year (288,000) out of the top five reviewed is Florida Panthers winger Matthew Tkachuk (44.5), coming in fourth place for the most admired athlete from Arizona.

Sharing his birthplace (Scottsdale) with Bellinger and Thybulle, Tkachuk’s sporting achievements are worth shouting about, especially with his previous team in the Calgary Flames.

The 2021-2022 NHL season was one of the most successful in Flames’ history to date, with Tkachuk playing a key part.

Tkachuk's new team, the Panthers, currently have +2000 odds to capture the Stanley Cup at Caesars Sportsbook Arizona in his first season with the club.

Native to Phoenix and spending his college days playing basketball for the Arizona Wildcats, Terry’s passion for basketball lives on. And clearly, people love keeping updated on his progress, with 33,000 tapping his name into Google every month this year (on average).

Terry might’ve come last in the top five Arizona-born athletes, but he saw the highest follower growth out of all, with a massive 51,000 people keeping up with his personal and professional life online in 2022. Not to mention, he had 17.9% of recorded positive online conversations this year, which was higher than second place winner, Thybulle (7.7%).

Now that you know who the most popular sports star is in your home state, you might want to dig a little further into more research we’ve found.

For further insights and information, head back to BetArizona.com, home to everything related to Arizona betting apps.

To determine Arizona's most popular athletes of 2022, we created an index that considered five key factors with individual weightings adding up to 100.

To create the ranking, BetArizona.com combined the score of each factor to get a final index score out of 100. And the higher the score, the more popular the athlete!