NCAA athletes have historically been forbidden from accepting brand sponsorships and paid deals. A recent NCAA decision changes this, allowing student athletes to monetize their name, image, and likeness. We charted the social media followings of every Division I athlete in Arizona to see for whom this new rule could be a game-changer.

As of July 2021, the NCAA will permit athletes to profit from their own personal brands.

Until now, student athletes were forbidden from accepting endorsement deals, brand sponsorships or any kind of compensation for the use of their name, image, and likeness (NIL). The former rule was meant to preserve the concept of amateurism — the notion that student athletes are students first, not professionals, and therefore do not require any compensation beyond incentives in the form of scholarships.

But two megatrends converged to weaken this foundational principle of the NCAA.

First, college sports have become hugely lucrative over the past few decades — generating billions in revenue through ticket sales, merchandise, and television deals, among other things.

In the age of social media, it also has become increasingly difficult — if not intrusive — to police the NIL rights of athletes’ personal social media accounts.

Note: Arizona SB 1296 took effect on July 23, 2021. The bill allows players “freedom to pursue endorsement deals, hire agents and promote their own independent ventures.” The NCAA’s announcement specifies that athletes must still follow their state NIL laws and that “colleges and universities are responsible for determining whether those activities are consistent with state law.”

How Can College Athletes Monetize Their NIL?

Sponsored social media content and advertising deals are the most obvious channels for many college athletes to market their personal brands.

For some of the biggest stars in college sports, the new NCAA rule opens the door to highly lucrative endorsement deals with iconic brands. But even for college athletes without national name recognition, a dedicated social media following among their classmates could make them ideal brand ambassadors for smaller brands and businesses in college towns.

Beyond social media and advertising, the right to monetize their own NIL would also give college athletes the ability to sell autographs, merchandise, athletic training programs, or use their platform to market other business or creative ventures as they wish.

How Much can College Athletes Expect to Earn?

The amount of revenue a college athlete can hope to generate by marketing their NIL will largely depend on the size of their social media following.

ESPN estimates athletes with only a few thousand followers may be in a position to earn $1-3K annually if they manage their brand with business savvy. On the other end of the spectrum, superstars with followings that reach hundreds of thousands of fans could earn as much as six or seven figures by monetizing their NIL in exclusive partnerships with iconic sports brands.

Which College Athletes in Arizona Stand to Earn the Most?

In light of the NCAA’s decision, we wanted to see which Division I athletes in Arizona are poised to make the most money by marketing their NIL. 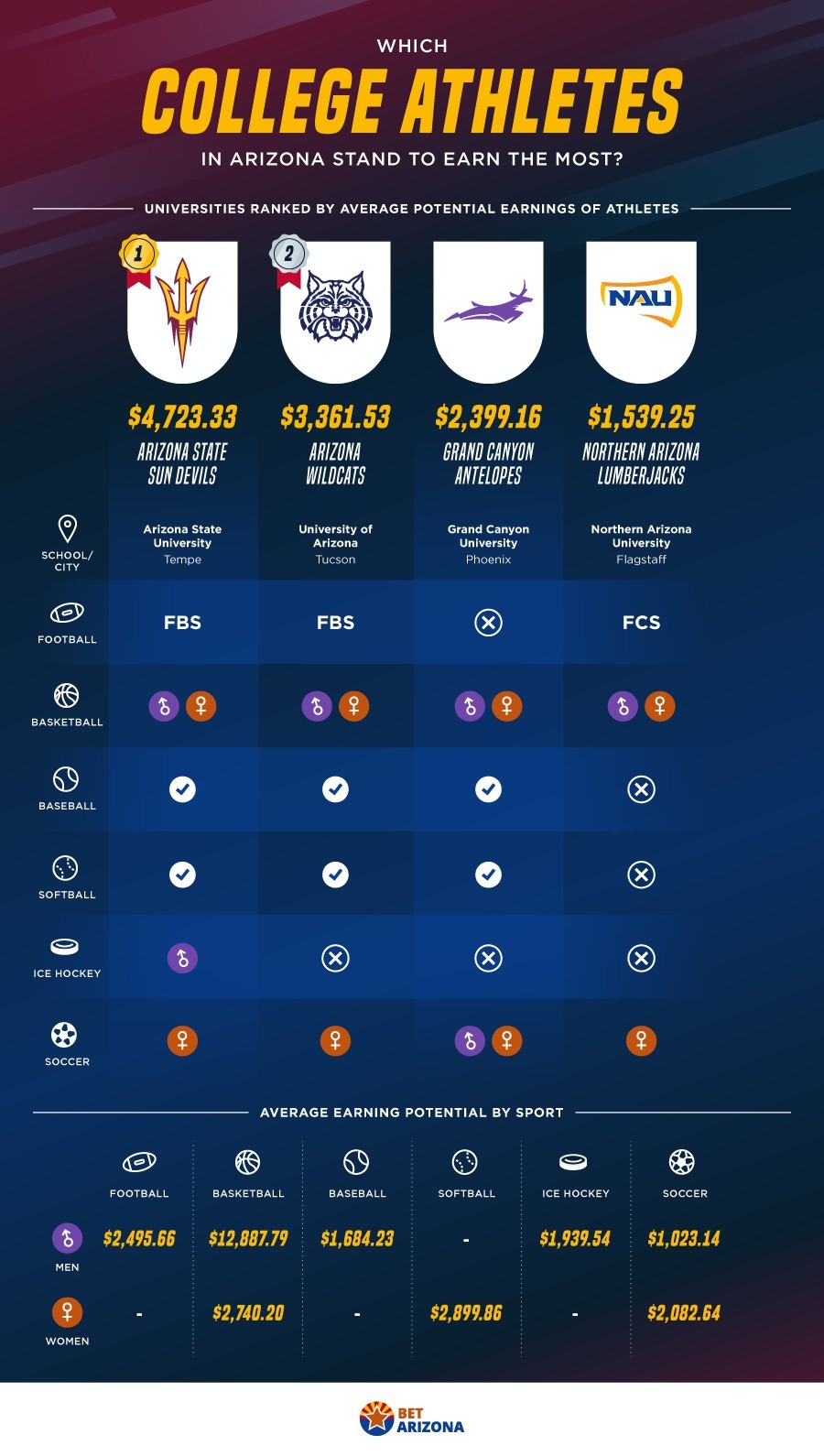 We added up the Twitter, Instagram, and TikTok followings of every player on these teams’ most recent rosters. Using an estimation of $0.80 per follower per year, we sought to better understand how athletic prowess and social media savvy can translate into real revenue for students.

Two women appear in the top 10 list at number five and six, respectively: Nicole Soto of the ASU women’s soccer team and Aari McDonald of the UA women’s basketball team.

Three football players also make the top 10 list: Jayden Daniels (ASU), Jaden Mitchell (UA), and Johnny Wilson (ASU). Mitchell, in particular, is a unique case. Despite his relatively low number of Twitter and Instagram followers, Mitchell has 37,800 TikTok followers — the highest of any athlete on the list.

Which Sports Get the Most Attention on Social Media?

Across all Division I NCAA sports nationwide, football is the biggest revenue generator. The same holds true in the state of Arizona, where football accounted for 42.3% of the income generated for the athletic department at UA and 38.3% at ASU in 2018, according to BizJournals.

In Arizona, men’s basketball is far and away the best sport to play for those looking to monetize their collegiate athletic careers. Men’s basketball players at universities in Arizona have, on average, more than five times as many social media followers as football players. This translates to an additional $10,000 to their average annual earning potential.

Women Athletes Can Make A Lot of Cash, Too

The financial gulf between men’s and women’s athletics is a well-known and troubling trend. A recent study by Global Sport Matters found that women college athletes receive less than 4% of the coverage on traditional media channels than their male peers.

But social media does not abide by the same trends as traditional media channels. With college athletes now permitted to monetize their NIL, many individual women are posed to out-earn their male peers.

Across all sports and schools, women athletes at Arizona universities have, on average, 30% fewer social media followers than men. But the picture is more complex on a school-by-school, sport-by-sport basis.

For example, the UA women’s softball team has, on average, nearly 6,000 followers per player, whereas the men’s baseball team averages only 2,200. Indeed, the UA softball team is one of the most successful in the Pac-12, having won 11 NCAA conference championships in the last 20 years as opposed to the baseball team’s three.

Women’s sports may be largely overlooked by a viewing audience, but the reach of female student athletes should not be underestimated. Of the 24 college athletes in Arizona whose strategic monetization of their NIL could bank them upwards of $10,000 per year, five are women.

NIL Rights a Game Changer for Many Student-Athletes

Only a handful of Arizona student athletes are poised to generate serious income from marketing their NIL. But even modest earnings could make meaningful improvements to these students’ lives and future careers.

Even a couple thousand dollars a year could be a big help to student athletes, many of whom do not come from wealthy backgrounds and whose training commitments make it difficult for them to seek part-time employment to support themselves while in school.

In addition, there are still many unanswered questions about NIL and college athletics, with universities and states trying to understand the rulings. The space is still the wild west, with pitfalls and gray areas prevalent.

But the newly won ability to profit from their own NIL rights could provide student athletes with enough money to keep them active in the sports world. Whether the extra cash encourages them to train harder or to pursue a sports industry career off the field, this income could make a tremendous difference in the career trajectory of student athletes.

Here is how we calculated the earning potential of student athletes in the state of Arizona: