The Arizona Wildcats kick off Year 2 of the Jedd Fisch era in San Diego, looking to turn the corner from a season to forget.

From there, Fisch’s team will host Mississippi State and FCS power North Dakota State before tackling the Pac-12 schedule.

For those looking to hit the Arizona sportsbooks and bet on the Wildcats, here’s a breakdown of how they have fared against the 2022 schedule against the spread. 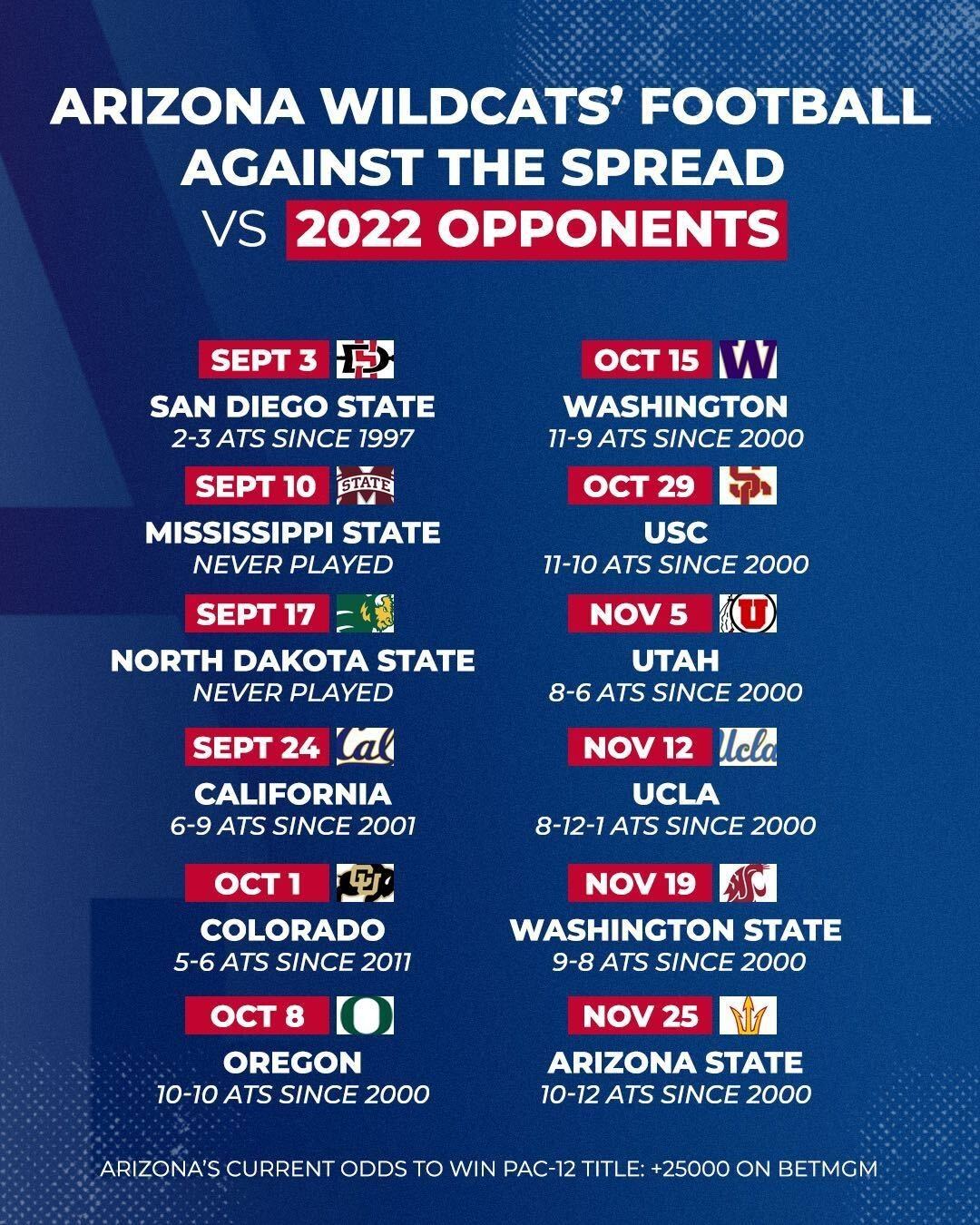 What Stands Out On Arizona’s Schedule

Arizona has never played Mississippi State or North Dakota State in its history, meaning both schools will add to the more than 85 teams the Wildcats have squared off against dating back to 1931.

On the flipside, the school Arizona has faced the most (to no one’s surprise) is its in-state rivals from Tempe, who the Wildcats have met 95 times dating back to 1899. The Wildcats currently lead the series, 49-46-1, but have not knocked off the Sun Devils since 2017. Arizona is 10-12 against the spread vs. ASU since 2000

For those who want to bet on college football in Arizona, it’s worth noting the Wildcats face the team they have their longest active win streak against (Cal, 6 games) and losing streak (USC, 9 games).

Despite six straight wins against the Bears, Arizona is only 5-6 ATS against Cal since 2011. Against USC, the Wildcats have covered in three of those nine straight losses and are 11-10 ATS vs. the Trojans since 2000.

Check out BetArizona.com all season for the best Arizona sportsbook promo codes.

Wildcats Game to Watch in 2022

It’s tough to say any game for Fisch’s bunch is more important than the season opener on the road against the Aztecs. Arizona will be the first team to play SDSU in its new Mission Valley facility (Snapdragon Stadium) when the two sides meet on Labor Day Weekend.

Arizona sports betting apps currently list the Wildcats as a five-point underdog. The over/under against the Aztecs is 49 total points.

The Wildcats’ 2021 season went off the rails when they lost 24-16 in Las Vegas to BYU in the opener — setting in motion a winless nonconference slate that included a 24-point loss at home to SDSU and a two-point defeat at home to Northern Arizona.

A win would give Arizona its first over SDSU since 2001, when the Wildcats got a 23-10 victory in San Diego.

The Wildcats’ first-ever showdown against Mike Leach’s Mississippi State Bulldogs on Sept. 10 will be one to watch. Leach was 1-2 at Arizona Stadium during his eight-year run at Washington State.

Caesars Sportsbook Arizona has Arizona at +40000 to win the Pac 12, tied for last in odds with Colorado.