Year Five of the Herm Edwards era at Arizona State begins this fall, with the Sun Devils looking to qualify for a bowl game once again.

The former NFL coach’s tenure in Tempe is on shaky ground, with an NCAA investigation and a coaching exodus stealing off-season headlines.

Some of those changes include wide receivers coach Prentice Gill and secondary coach Chris Hawkins getting fired, while offensive coordinator Zak Hill and tight ends coach Adam Breneman resigned in the wake of ASU’s NCAA investigation.

The investigation centers around whether Edwards and former defensive coordinator/associate head coach Antonio Pierce (who himself resigned in December) violated NCAA rules by hosting recruits on campus during the COVID-19 pandemic.

The Sun Devils’ roster also saw an exodus of its own, with 16 members of last year’s squad entering the transfer portal, including three-year starter at quarterback Jayden Daniels, who left for LSU.

Arizona sportsbooks have taken notice, with the Sun Devils’ Pac-12 title odds among the bottom half of the conference.

ASU’s schedule appears set up for success in 2022, however, with non-conference games against Northern Arizona, followed by a road game against Oklahoma State and a home clash against MAC participant, Eastern Michigan.

Here’s a breakdown of the Sun Devils 2022 schedule for those who bet on college football in Arizona. 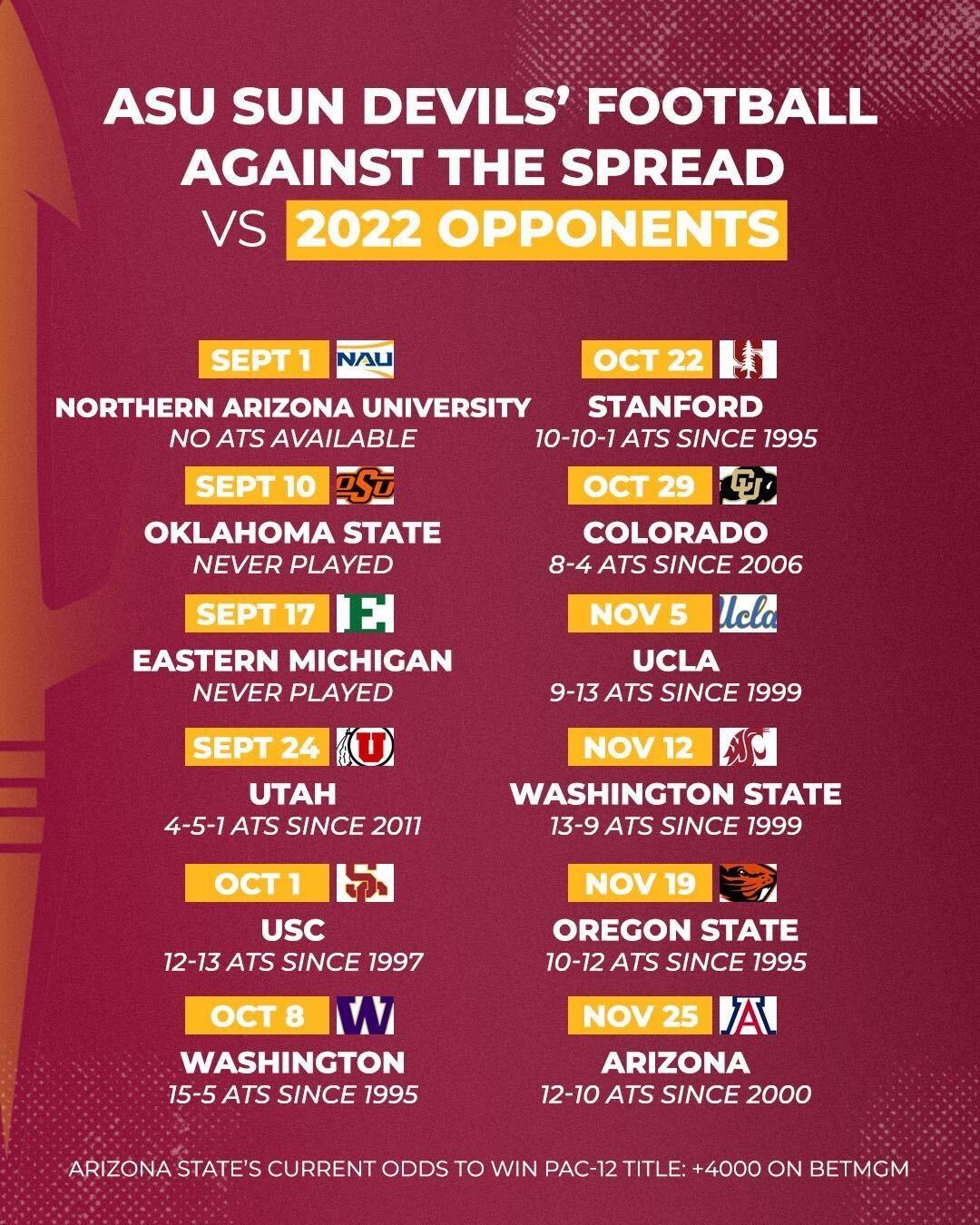 What Stands Out On ASU’s Schedule

The Sun Devils face a meat grinder of a nine-game conference slate, opening with home games against Utah and Washington sandwiched between a road tilt against USC.

ASU has lost two of its last three and three of five to the Trojans, despite beating them, 31-16, a year ago — and has fallen in two straight to the Utes by an average of 14.5 points.

The Sun Devils’ longest active on-field win streak against a Pac-12 foe happens to come against the Wildcats.

ASU has won five straight against their in-state rivals, including three-straight double-digit victories. The Sun Devils are 3-2 ATS in that winning streak and 12-10 ATS vs. Arizona since 2000.

Edwards’ team doesn’t have an active win streak against any of the other eight Pac-12 teams the Sun Devils are slated to face in 2022.

Check out BetArizona.com all season for the best Arizona sportsbook promo codes.

One ASU Sun Devils Game to Watch in 2022

Watching ASU venture to Stillwater to face off against a Cowboys team fresh off a 12-2 campaign on Sept. 10 at 4:30 p.m. Arizona time will be appointment television and have keen attention from Arizona betting apps — with Mike Gundy looking to crater the Sun Devils’ aspirations.

From there, keep an eye on ASU’s Pac-12 opener in Tempe against a Utah squad that made its first Rose Bowl trip a year ago.

The Utes are currently atop Caesars Sportsbook’s Pac-12 championship odds board at +200, alongside USC, which the Sun Devils square off against in their second Pac-12 contest of the year.

If ASU can survive that stretch without a loss, it will be in the driver’s seat to secure a berth in the Pac-12 title game for the first time in nine years.

If not, the Sun Devils could crash and burn given the immense roster and staff turnover during the offseason.

FuboTV Staying in Sports Betting Market, But Wants to Find a Partner

Arizona, ASU Conference Future: What Are the Odds They Leave the Pac-12?