The Phoenix Suns tipped off their 55th season of basketball last week, kicking off what Arizona NBA betting fans hope will be the franchise’s first championship season.

Though the Suns have been one of the NBA’s most successful franchises of late, winning the Western Conference in 2021 and posting the league’s best regular season record last season, the team’s chase for immortality continues — and it's left the team's fans wanting.

Year Five of the Monty Williams era kicked off with gusto Wednesday, when the Suns exacted a measure of revenge against a Dallas Mavericks team that knocked them from the playoffs a year ago — storming back from a 22-point deficit to capture a 107-105 victory in the team’s opener.

$1,000 Risk Free Bet
BETAZCOM
Terms apply for all bonuses. Must be 21+ to participate. 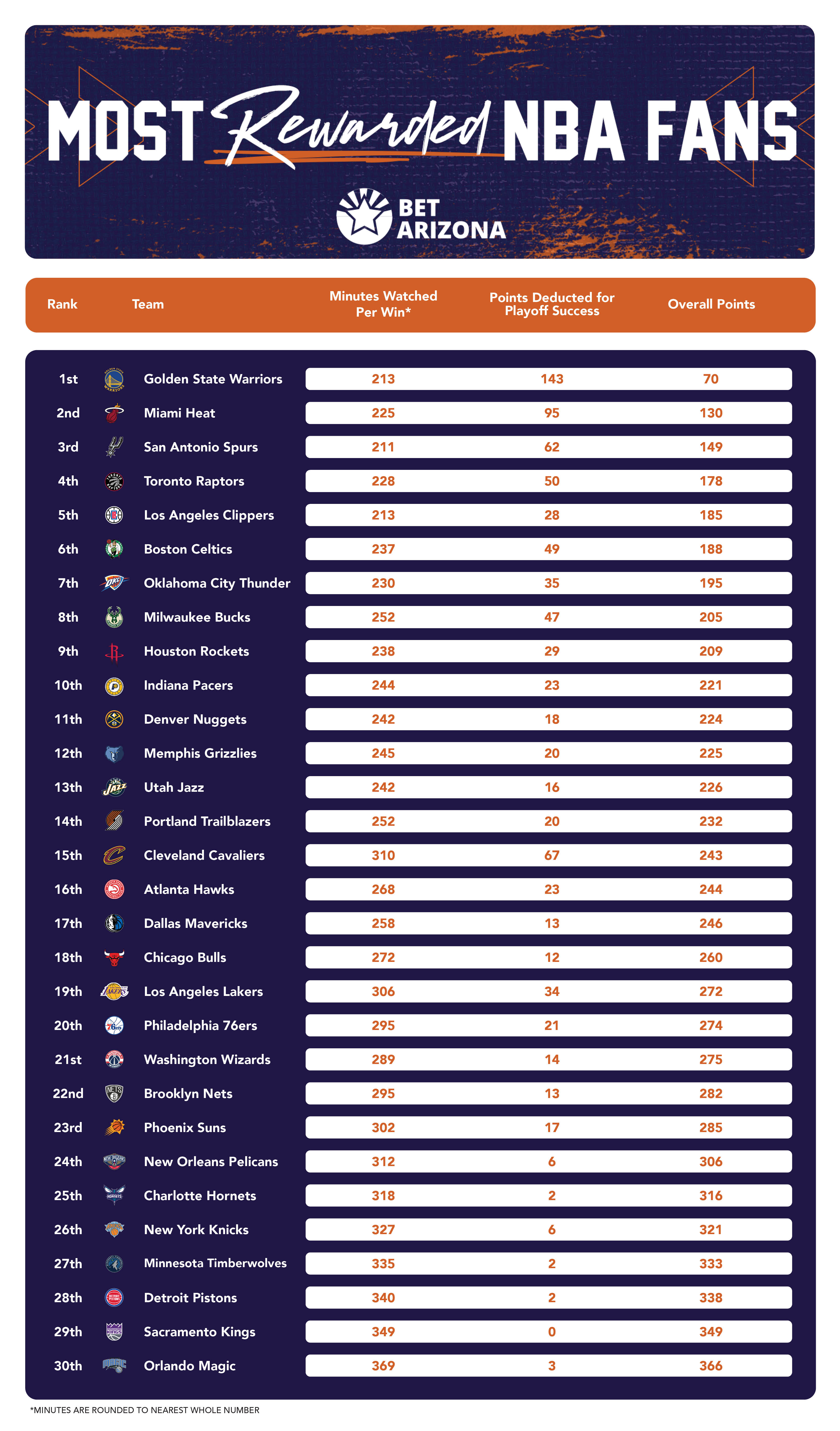 That on-court success hasn’t translated into much of a reward for Suns fans over the course of the past decade-plus, however, as Phoenix ranks 23rd out of 30 teams in fan fulfillment.

BetArizona.com developed a ranking system of the 30 NBA teams to find what fanbase has been rewarded the most over the last 11 seasons.

The first category — “Minutes Spent Per Win” — was determined by taking the amount of regular season games played by each team (from 2011-12 season to 2021-22 season) multiplied by the average length of an NBA televised game (2 hours, 13 minutes). Once we calculated that number, we divided it over the number of wins during those same seasons to arrive at the minutes watched by fans per regular season win over the last 11 seasons.

The second category — “Points Deducted for Playoff Success” — was utilized to decipher the value of seeing playoff success during those 11 seasons gathered in the first category. The point values were 1 point per playoff berth, 3 points per playoff series win, 3 points per NBA Finals appearance, and 15 extra points for NBA Championship win. After adding all the points together for every postseason from 2011-12 season to 2021-22 season, the points were deducted from Category 1 to arrive on the final points and rankings.

How We Determined the Suns Standing

Other than that, the interim stretch between the glory years of Mark D’Antoni and the resurgence under Williams was largely spent in the league basement — with a total record of 266-447 (.373) between 2011 and 2020.

That lack of on-court success during the eras of head coaches Alvin Gentry, Jeff Hornacek, Earl Watson and Igor Kokoskov resulted in an outsized amount of misery and little in the way of fulfillment for Suns fans, netting the franchise a grand total of 17 playoff points, combined with an average of 302 minutes per win.

The latter figure ranked 22nd in the league, while the Suns’ 17 points for playoff success ranked 19th overall — giving Phoenix an overall score of 285 points, which put them in 23rd spot on our list.

And despite being well thought of by Arizona betting apps last year, the Suns were knocked out of the postseason in the second round.

Can Phoenix atone for last year’s playoff failure — and a general decade of discontent?

Arizona sportsbooks give the Suns a fighting chance, as they currently sit at +1000 to win the 2023 NBA Championship, ranking sixth in the league.

The Suns also have the third-best Western Conference title odds at BetMGM Sportsbook Arizona at +450, coming in behind the Golden State Warriors (+300), and L.A. Clippers (+325).

As far as divisional odds are concerned, BetMGM has the Suns at +200 to win the NBA’s Pacific Division in 2023, ranking in a tie for second with the Clippers, behind the Warriors (+175).

Come to BetArizona.com for the best Arizona sportsbook promo codes.