July 24 is National Tequila Day. It recognizes the popular liquor made from the blue agave plant. The quality of the tequila may depend on how much blue agave is in the drink — it must be at least 51%. Some distillers use a sugar cane substitute to fill out the other 49%. But not the premium tequilas, which are less likely to lead to a hangover.

Blue Agave is popular in Mexico, where Jalisco is considered the home of tequila, although tequila may come from other regions. National Tequila Day was recognized by the Mexican government in 2018. Olé! 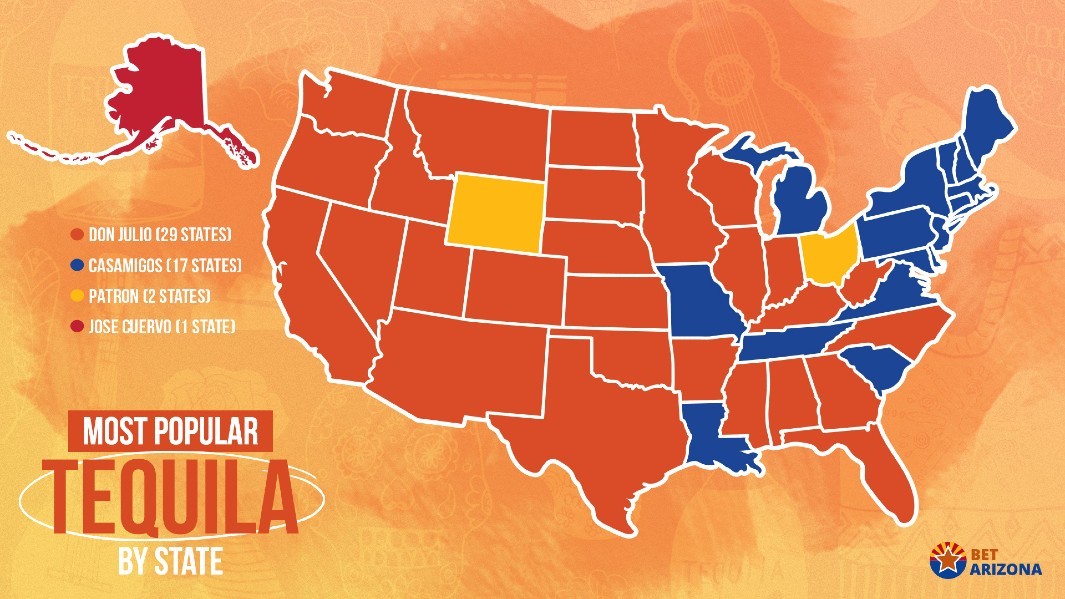 Two other tequilas to make our list are Patron, No. 1 in Ohio and Wyoming, and Jose Cuervo. Country singer Shelly West’s love — nearly 40 years ago she sang a love song to “Jose Cuervo” — only got it to No. 1 in Alaska. The man behind Patron, founded in 1989, is John Paul DeJoria, the billionaire philanthropist who also launched the John Paul Mitchell Systems hair products line in 1980.

But being most popular, based on our methodology, does not mean best-selling: As of the 2020 numbers, that Top 5 would be Jose Cuervo, Patron, Sauza, 1800 and Don Julio.

BetArizona.com used Google Trends and Vinepair.com to complete the above study. Utilizing Vinepair.com’s list of most popular tequila brands of the year, we then used Google Trends to determine the most searched brand in each state of the United States. After completing the trends over the past 90 days, the four brands were determined to have at least one state with it as their most searched tequila.

Tequila Makes You Break Out in Song

Tequila was immortalized in song by Jimmy Buffett in the 1977 hit “Margaritaville” and Buffett now has his own tequila under the Margarita Spirits label. The Eagles sang of a “Tequila Sunrise,” Miranda Lambert knows what “Tequila Does,” Dan + Shay had their own hit with “Tequila.” Country songs do love their tequila.

Also loving tequila — at least the business side — are celebrities: Eva Longoria has Casa Del Sol, Dwayne “The Rock” Johnson has Teremana, Kendall Jenner has 818, Rita Ora has Prospero. Nick Jonas and John Varvatos teamed up for Villa One. Adam Levine and his wife Behati Prinsloo teamed up for Calirosa. NBA legend Michael Jordan is one of the hoops people taking a shot with Cincoro. The Chainsmokers are into Jaja. The list goes on.

The king of celebrity tequilas is Casamigos, from George Clooney and Rande Gerber, which according to BetArizona’s methodology is the most popular tequila in 17 states, including most of the northeast.