The Real Cost of a Beer in Arizona

Every year, more and more drinks are added to the market, with new variations of our favorite beers (and spirits) being sold in local supermarkets and restaurants. With the ever-popular interest in beer in The Grand Canyon State, we at BetArizona.com took a break from Arizona sports betting to find out how much you guys are shelling out each time you buy a beer.

So, we collected data from Numbeo - the world's largest cost of living database - and analyzed our findings to reveal which Arizona areas you'll be spending the most on for domestic and imported beer.

We studied data about restaurant and supermarket beer costs, and you won’t believe how much you’re really spending on your favorite hops here…

Just read on to discover all of this and more, so you can gauge whether a post (or pre) game beer is really worth sipping! 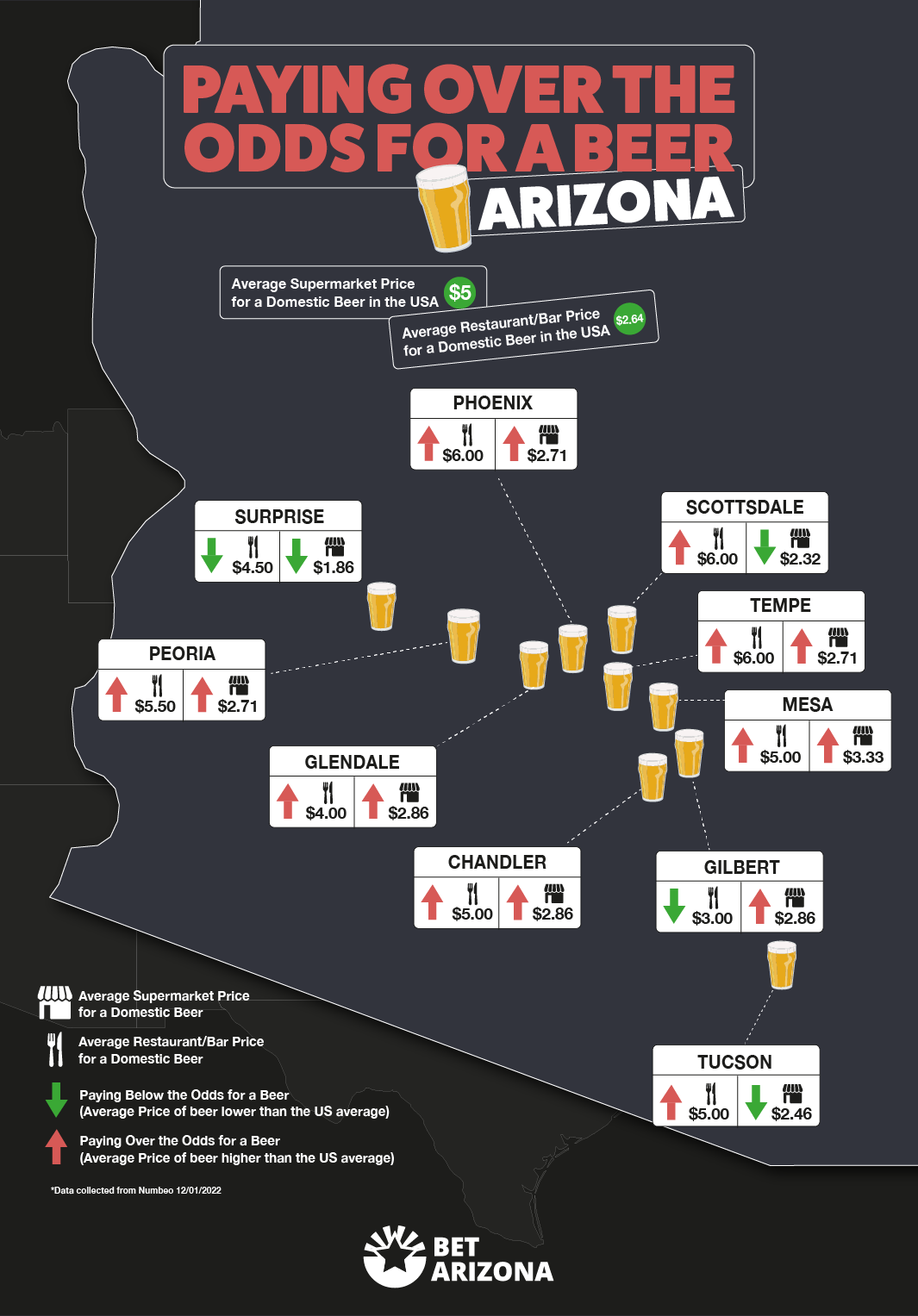 Cost of Beer at the Supermarket...

Chances are you’ll be forking out more for an imported beer in a Tucson supermarket than in any other Arizona area, with a trusty brew costing a whopping $5.29!

Odds are, you’ll be opting for a domestic beer from your local store in Tucson instead, since these beers cost just $2.46 in comparison. At least it makes your beer choice a bit easier…

The second highest (imported) supermarket beer price is in Scottsdale, where you’ll pay $4.50 for an imported beer from a supermarket. Yet strangely, a domestic beer from this area will cost just over half of this price ($2.32).

Arizona Restaurants Charge Up to $8 for Imports

Your love for hops might be swapped for something cheaper in these areas in Arizona, with imported beers from Flagstaff restaurants costing a whopping $8! Coming in at only $1 less are imported beers sold in Scottsdale restaurants, costing as much as $7.

The high price of sipping these hops while you dine may come as quite a surprise. However, since the Arizona Cardinals, Diamondbacks and Coyotes and Phoenix Suns play in the state, restaurateurs probably know fans will head out for a nice meal before, or after, a game. So, owners could raise the price, knowing people will be willing to pay.

Your love for hops might be swapped for something cheaper, but it seems $6 for a restaurant beer is pretty standard in Arizona, with areas like Scottsdale, Tempe, Surprise, Prescott, Avondale, Lake Havasu City, Tucson and Bullhead City, as well as Phoenix, charging this to diners.

As for domestic beers, when you’re eating out at a restaurant, the real cost of this beverage can be as much as $6 in Phoenix. Since this is the home of the beloved Suns basketball team, it wouldn’t surprise us if restaurants charge more in this area, knowing people will pay after seeing their favorite sportsmen play.

Then again, Avondale, Yuma, Tempe and Scottsdale restaurants also charge this price ($6) for an ice-cold beer, which is above the average price ($2.64).

The Cheapest Arizona Area to Buy a Beer at a Restaurant

If you’re big on beer but don’t want to pay startling prices for one in a restaurant, you’re best off visiting eateries in Gilbert and Queen Creek, for the cheapest pint of domestic beer in all of the Arizona locations studied ($3).

And when it comes to imported beers, restaurants in Queen Creek will get you the most bang for your buck ($3.50), which is only 50 cents more than a domestic beer served with your food.

And Gilbert is the second cheapest Arizonian restaurant spot for this type of beer, but it’ll cost you an extra $1 for the luxury of it!

The Cheapest Areas for Supermarket Shoppers

When you’re heading to the store for some affordable hops in Arizona, chances are you’ll find the cheapest imported beers in Tempe, at a nifty $1.20 – the lowest of all areas studied.

Although, domestic beers actually cost over a dollar more here ($2.71)!

Bullhead City ($1.46) was another prime spot for well-priced imported beer, and Yuma and Peoria only charge $2 for imported beer.

As for other affordable domestic beers from supermarkets, you’re best off buying from stores in Surprise at as little as $1.86.

Bet $5, Get $200 in Free Bets Instantly
Activate Code
Terms apply for all bonuses. Must be 21+ to participate.

Now you know where to head for a cheap beer, and where to avoid buying an expensive one, you’ll probably be interested in finding out more information on the things you love.

Simply visit our site to find articles that speak your language, plus everything you could want on Arizona betting apps.

Data was analyzed and collected from Numbeo, on the average cost of a beer across the U.S.

Cities across Arizona were then analyzed to reveal whether places are paying over the odds for a beer. Data was collected on imported and domestic beer. The average beer price in the U.S. was: